Left and Right, Politics and Economics and Culture 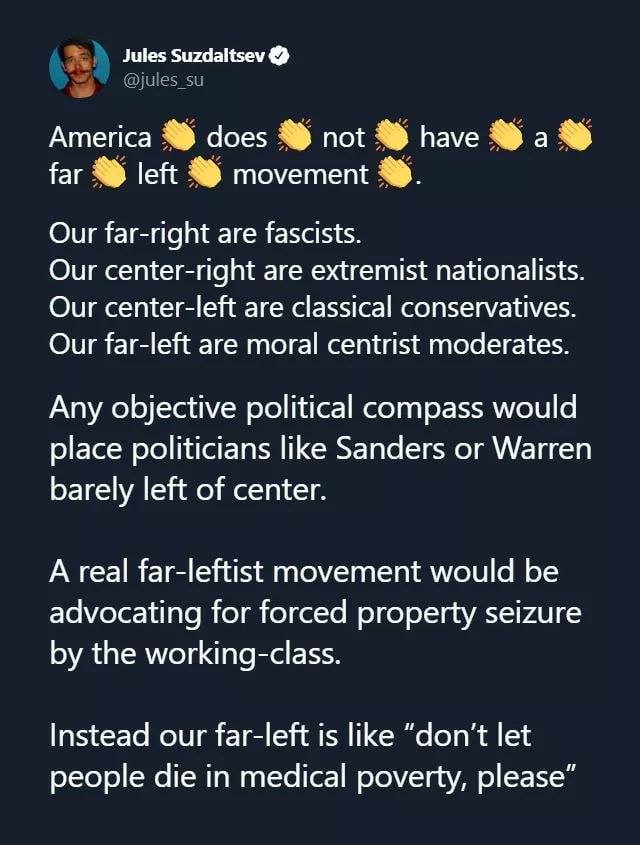 I’ve tried to make this case to various people, usually to no avail (well, not everyone – you know who you are). I said to someone not long ago that I saw Obama as a moderate right-wing politician – his jaw dropped. But it’s true. The tipping point to me is this – is he trying to repair the failed structures of the market, so that it can do what it claims to be able to do (generate efficiencies, distribute risk, encourage innovation, produce incentives, set prices, etc.), or has he given up on the market as having those abilities and is trying something else? It can be hard to tell sometimes, but with Obama it wasn’t. Everything he did was to try to fix current and historical things that skewed markets. This is one of the ways I can see the depth of racism on the right – they absolutely could not see that he was, at heart, one of them, because of his skin color. (And I say that he’s right of center with admiration for him as a person, as well as the recognition that dire and destructive US foreign policy got worse on his watch, and it didn’t need to be like that).

For that matter, Warren too shows her roots on the right – she too is trying to repair the mechanism, not get rid of it. She’s also recognizing that not all markets are the same (and this might put her to the left of center), in that things like health and education don’t work like cars and jewelry. But in the end she’s trying to make a market economy not dominated by corporations, where it is possible for individuals and small businesses to have an effect, where there are fewer monopolies, etc. Again, the fact that many on the right don’t see this, is evidence of just how deeply dependent they are on those corporations, and that they can’t imagine a market that is anything but the exchange that corporations initiate and control. (And again, I like her too, in fact she’s my current front-runner).

This says to me that the current mindset of the right in the US is not about constitution or principle (after all, they’re willing to jettison any of these at a moment’s notice), and it’s not about economics (since they’re unable to recognize those who would hold the same basic ideas on the economy that they would). It’s about culture.

On the left, I hear arguments to get rid of capitalism. Well, maybe, but we have to distinguish between markets (which have existed since the beginning of time – we’ve always exchanged things – and which we could see in non-human places as well, which is why we can apply economics to things like evolution), and capitalism (which is a particular configuration of the market in which money becomes central, along with a number of other things), and corporations (which are actors within a capitalism market, alongside individuals, small businesses, governments, etc.).

One could want to change how actors behave within capitalism – that’s Obama, Warren, and lots of other people. One could want to get rid of this market configuration – but then we’d have to figure out what the alternative would be. And, we’d have to answer the questions that capitalist systems answer – how do we operate within large-scale, anonymous societies? How do we have freedom for individuals, so that not everyone has to believe the same thing in order for society to operate? How do we have checks and balances which are not dependent on being able to predict the future or have some divine insight into human and/or natural action? How do we work with complex systems (in the technical sense of complex), which are not linear? In short, granted that there are significant injustices in capitalism, how do we find a system that doesn’t have more, or doesn’t target particular groups for injustice, or doesn’t have an extremely violent and chaotic transition?

The French Revolution is still instructive, I think. People had had it with a stratified society which was gamed in favor of the already wealthy and influential (sound familiar?) They overthrew it all, instituting what at the time looked like the highest ideals and best practices of life together. And within a few years, you get the Reign of Terror, and then a bunch of Napoleons. The lesson here: anyone who thinks that they would make it through a transition unscathed is dreaming.

Now, the conditions are not unlike France before the Revolution. There are a lot of people systemically left out. There is systemic racism and sexism. Some might think that the match was struck for unrest when the current president was elected – I think it will be struck when he is defeated in the next election and refuses to leave office “for the good of the country” and “because my people want me to stay”. He might not make it that far (I wonder about his health), and I don’t think there’s anyone who could rally his base the way he does, so without him there it might be different.
But the point is that a political revolution and an economic revolution could be imagined at the same time. That would be messy, though, and it would have every likelihood of blowing up and turning very ugly.

So, I’m always a little leery of the calls to tear down capitalism. There are without question deep issues of justice that have not been solved, and indeed which only get worse. As Marx predicted, the gap between rich and poor is widening. In fact, I think Marx turns out to be right about quite a lot, even if he is still a child of his time and unable to see some structures outside of the Industrial Revolution in Europe. And it’s worth remembering that he saw capitalism as solving some problems that came before, and as a necessary step.

The issue is, I guess, what’s next and how do we get there? And how do we do it if we actually care about individuals, not just the ones in our tribe but others as well? Capitalism isn’t going to be taken down at the ballot box – that’s not what it is for. But I’m also very suspicious of quasi-utopian solutions (they don’t have a great track record), and most anarchist solutions seem to depend, like religion, on convincing enough people of a particular way of thinking that there can be a critical mass.

And, I keep returning to the fundamental problem as one of culture, not reason or economics. The thing that capitalism is supposed to be good at is allowing for very fundamental difference (indeed, requiring it). We don’t have to have a society in which everyone knows their place, or has a specific role from birth, or is conscripted into servitude. It’s supposed to be a system in which free people can act, and bring about more freedom. And yet, the criticisms are real – it has not done that. Defenders will say that that’s because there have been other things to thwart the true capitalist spirit (but, religious people say the same about religion, and this is the point at which Ayn Rand and religion become one in their fundamental belief in the unseen orderer of things). The breakdown of cultures might be seen as a consequence of the application of capitalism, except that we’ve seen breakdowns for years in many places and many systems.

Ironically, the left and the right switch positions when it comes to culture. The left wants a thousand flowers to bloom, a thousand genders and races and everything else, with room to grow and explore and make something new. That sounds to me like the foundational conditions of capitalism. The right, on the other hand, wants adherence to a true vision of the nation, of right and wrong, and are willing to use the instruments of state power to achieve that. That’s centralization, that’s control over peoples’ lives. This might be why the left can’t see its way past capitalism, and the right can’t see its way past authoritarianism. Each has become enamored with the logic of the other.

So, culture is wrapped up in all this. And there’s no clear way out of it. “We should all come together” sounds less like a slogan of solidarity and more like fascism, while “Let a thousand flowers bloom” sounds less Maoist and more like a strategy for triangulating interests and looking for market share. Now more than ever, we need people who can think through culture carefully.

The Florida state governor, our own mini-Trump, has another “red-meat for the base” bit of legislation. No surprise here at all. These people feed on the… Continue reading…

Undermining the Future in Florida

In another edition of My Stupid State, Florida now has a bill before the legislature that will change the state support for students going to universities. It is the Bright Futures program, which has been… Continue reading…

Yet another attempt by far right Florida Republicans to not let the market speak for itself, but try to predetermine what people should take in university based on a BS idea of what… Continue reading…

Oh France, look at you, thinking that you are condemning ideas from the US when in fact you are just replicating the culture wars of the US. Ok, not France in general, but… Continue reading…

On Being Gabriel Apata Instead of Achille Mbembe

An old problem, still with us